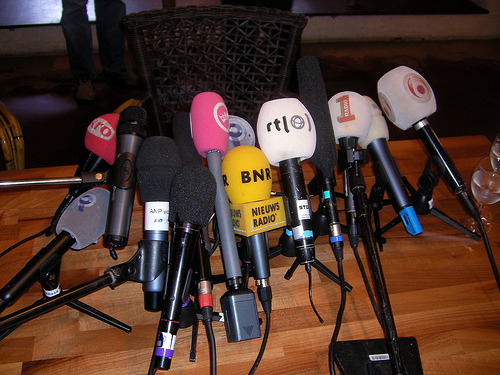 ‘Thank you for informing me that!’ Afzal got up from his chair after listening to what the old-man had to say, and signalled one of his men to call upon the media. He wanted to host a press-conference, right now! The old man was asked to bring the girl, so that Afzal could prove his point.

After an hour or so, there were herds of cameras and media-persons in front of his house. He asked them all to be patient. Everyone was eager and keen to know what big announcement Afzal had to make just a week before elections. A press-conference wasn’t something everyone called on a regular basis.

‘Alright, please be seated. I have a strong news today for you all.’ Afzal started stirring up the controversy by being silent, and outspoken at the same time! He was being silent about the subject, but provoking the media to ask him questions.

‘Sir, is it about Zakir’s involvement in the motel-girl murder case?’ a reporter said as he turned his recorder towards him.

‘No, that in itself is a shameful matter.’ Afzal closed the topic deliberately.

‘Then is it about Zakir making allegations of corruption against you?’ another reporter fired a question at him. He was patient, much calmer than Zakir who would have never been able to hold a press conference at his place.

‘Then is it about the Tibetan Market bomb blasts?’ a female reporter stood up with a mic.

‘Well, pretty much yes. The matter is rooted to that day.’ Afzal started with his statement.

‘My cousin, Zakir, who happens to be involved in pretty criminal and corrupt things, is a mastermind behind the Tibetan market bomb blasts too. Nobody can prove it, so he’s free, and he can’t be arrested on the base of a statement, that’s why he was never arrested. But what he tried to do yesterday, crossed all the limits. Tibetan market is mainly occupied by Hindus and it is a very well-known fact that how much he hates the other religion, but we, we are not like him. We are tolerant, and we are accepting. We give equal rights to people of all religions, castes and communities.’ Afzal stopped to take a sip of water from the glass above him, ‘Last night, an old man came to me. He was pretty depressed and worried. His daughter-like girl, who is a Hindu, was in danger now. Her mother and siblings were killed in the bomb blasts, and since then she was searching for a job. Poor woman joined Zakir’s party, unknown of the fact that he is a brutal wolf who would slay her down, but thank God, the old man informed us on right time.’

‘Where is the man and the girl?’ media fired their first question.

‘The man is in hiding, as he can’t show his face on camera. It would make his life dangerous too. And the girl, she is in my protection. I promise to protect her, and safeguard her for the rest of her life. I promise that until and unless she is under my surveillance, nobody can even touch her! You can see this footage where the girl is narrating the story herself.’ Afzal handed over the CD to the media-men. The media-reporters clapped at his generous promises and acts, and immediately he was shown as an angel on the TV along with the girl’s clip that proved Zakir to be a devil.

‘He is the right man, it’s time we re-consider our votes.’ said an old man at a tea-stall, and all others agreed.

The wind in Kashmir was now flowing in Afzal’s direction. People saw his grandfather Zafar Shah Hamidi’s image in him, and they were confident that this man had the capability to take Kashmir to another level. They were at least sure that he was much better option than the corrupt Zakir, who thought nothing beyond money and booze.

‘And where is the girl, Sir?’ the reporter asked with curiosity.

‘She is safely kept at my sister Sana’s home, which according to me was the safest place for her to be. Thank you.’

‘Sir, sir one more question, sir…’ the reporters kept shouting with their ‘one more question’ request but Afzal wore his shawl over his kurta, and walked out of the room.

There was a lunch hosted for the media-people at his dining. It was a huge buffet consisting all kinds of vegetables and meats. Media people never received this kind of hospitality before, ever! Even some of them decided to vote for him in the coming elections, right there at the buffet.

‘This man has power. He can take a stand. It’s definitely a much better option than that asshole Zakir!’ said a reporter, and the other one nodded.

‘But you can’t be so sure. They are all nice and good till elections. Who knows what will become of him after elections? He said he will protect that Hindu girl, are you sure he won’t be the first one to kill her once he’s elected?’

‘Hmm…point! Let’s see then what happens.’ the reporter sipped tea from the mud-cup. Politics was a game for them, something they enjoyed the most.

On the other side, Zakir was also glued to the TV since morning, since his men informed him about a sudden, untimely press-conference by Afzal. After the final statement was made by Afzal, he got up in anger and disgust.

‘I am so happy that I killed that street-whore! This man deserved it. He’s such a bastard!’ Zakir threw a glass across the wall, and it shattered into a million pieces.

‘Bhai-jaan, calm down please…’ Abbas consoled him. He was the softer one, always much calmer and peaceful, while Zakir was an animal.

‘You don’t know in how much trouble that bitch has got herself into. Find that Kavya girl, and shoot her in the head, that bitch. But let me rape her before you kill her. She deserves the worst death on this land!’ Zakir wore his overcoat and was getting ready to walk out of the house to hunt down the girl.

‘Don’t stop me, not today! It’s always because of you that I stop, but what that girl has done…’

‘That girl hasn’t done anything, bhai-jaan. Think with an open mind!’ Abbas continued, ‘It’s Afzal who is provoking you by using this girl against you, he wants you to kill her, so that it is finally proved that you are against Hindus! He brought this topic in limelight for a reason before politics. You can’t do anything stupid, not now…please bhai-jaan think about it!’

Abbas was right in so many ways. Zakir stopped, hugged him and decided to rather move in.

‘Little brother, you are so much clever and have a steady mind. So much unlike me. I wonder if you were not there, I wouldn’t be fighting this election, rather would be rotting at home, under father’s imposed house-arrest. He has anyways already warned me for not being involved into anything till elections are over! I can’t believe that the old man has rotten with cancer, but his brain still runs like horses…’ Zakir burst out into laughter. Abbas joined him.

Zakir was not done yet. He planned something brutal this time, something that would end his problems forever. He was just waiting for the elections to be over so he could finally unleash the beast inside him!