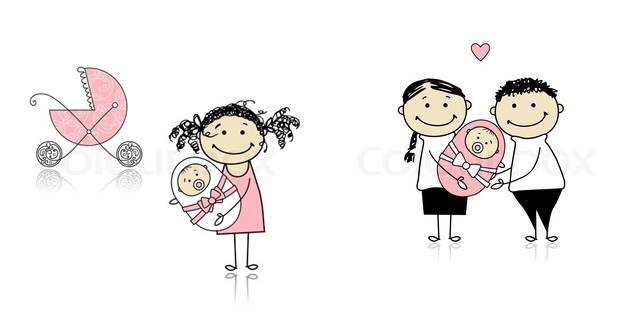 ‘It’s paining so damn bad, ouch!’ Kavya screamed out loud. She was in the hospital, bracing up for the delivery of her first child. Her parents had arrived from Chandigarh, and Ishan was looking screwed up!

The doctors shifted her on the stretcher from the wheel chair, a nurse pushed the stretcher inside the operation theatre, and the light outside became red. Ishan’s heartbeat started racing, and he felt breathless.

‘Hey son! How are you?’ Kavya’s father patted Ishan’s back. Ishan was biting his teeth in nervousness.

‘This is the same expression, that I saw when Kavya told us about you, back in Chandigarh, 3 years ago. Relax kid, be a man!’ Kavya’s father slapped Ishan’s back so hard, that he almost hit the front pillar in the hospital corridor.

‘I’m sometimes ashamed of Kavya, for choosing such a weak man, who can’t even stand upright!’

Ishan ignored his insult, and stepped towards the operation theatre. He wanted to enquire if Kavya was alright.

‘Mr. Rao, we’re afraid, your wife isn’t doing well, and I think we have to operate her now.’

‘Don’t worry, Mr. Rao. C-Section is the most common way of delivery in India now, and it’s completely safe, you just relax and brace yourself to welcome the new member of your family!’ the doctor smiled and Ishan smiled back feebly.

He just prayed for everything to go well. Everyone standing outside the operation theatre was nervous and confused. Only Kavya’s father was relaxed and chilled out. Maybe because Army had trained him to control his emotions well.

After a few hours, the whole team of doctors came out of the operation theatre. Ishan immediately rushed towards them and inquired about Kavya.

‘Congratulations, Mr. Rao! You’re a father of a beautiful baby girl!’ the senior doctor hugged Ishan. Tears started flowing out of Ishan’s eyes. Kavya gave her the most beautiful gift of his life. Ishan felt even happier seeing his daughter, which was in the arms of a nurse. He almost snatched his baby and hugged her. The little girl looked just like Kavya.

‘Little Kavya has arrived!’ Ishan announced and all the family members stood up to love the third generation of Rao family.

Ishan handed over the baby to his mother and himself went inside to see Kavya. She was lying on the bed, weak and partly unconscious. Ishan gently kissed her on the forehead.

‘Thank you Kavya. Thank you so much, darling!’ Ishan held her hand. Kavya wasn’t in the state to even speak properly. She just smiled back.

‘Today I’m feeling like the luckiest man on earth. With a baby as beautiful as you, you’ve made me a proud father, thank you!’ Ishan just hugged Kavya, and she responded by gently caressing his head. She kissed him on his cheek, and wiped off the tear that fell from his eye.

‘I’m really very happy, Kavya. You have no idea what have you done for me!’ he hugged her back and kissed her on her lips.