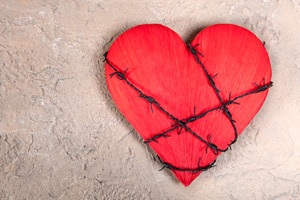 ‘See, I know this is hard to believe, but he’s not the one who’ll marry you, Natasha wake up and forget him! Just break up with such a guy, there’s nothing in such a relationship, why don’t you understand?’ Akanksha held her from her shoulders, ‘Such guys want girls only for entertainment, and nothing more. Why would he marry you, tell me? He never introduced you to his family, there were a million other girls in his life before you, why did he ditch them all? You call this love? Sweetie, this is lust!’ Akanksha spat the blunt truth on her face.

‘Natasha, if you truly want a good guy, you should learn to wait! I’m not against love marriage or anything, but you should know the guy first, befriend him and know his family, know his background before you make any big decision, a decision which may cost your life tomorrow.’ Akanksha kept on speaking, and Natasha listened to everything.

‘He’s a rapist, a criminal! Break up with him, Natasha!’

‘I can’t break up with him, Akanksha. I love him, damn it! It’s enough, now! You can’t put all blames on someone you don’t even know. Jayant is not that kind of guy, I know him, I love him, and if I’ve slept with him, why are you being jealous?’

‘Jealous? Do you even understand how much deep shit are you in, this time? If Sheetal aunty gets to know about all this, you’ll be doomed for your lifetime, and you know that better than me!’

‘So what? It’s my life…please leave me alone!’

‘What about the bond we both share as sisters? How can you be so selfish?’

‘And how can you be so self-concerned? Just because you don’t want me to have fun in my life, you’re blaming him for being a murderer and a rapist? What if I call Shrey that? Tell me, did Shrey rape you on your honeymoon?’

Akanksha couldn’t bear it anymore. She stood up and was about to slap her, but Shrey opened the door of their room, and she turned with her raised hand to see who it was.

‘Hey! What are you doing?’ Shrey stepped in.

Akanksha was amazed by Shrey’s untimely presence, and Natasha started crying to gain some attention.

‘Why are you crying?’

‘Nothing, she’s out of her mind, this girl has gone mad…’ Akanksha was interrupted by Shrey, ‘Akanksha, you go and get me something to eat, and leave me alone with her for a moment…’

Akanksha caught the signal and left the room. She knew that Shrey had a knack in handling girls. He was the one who handled sobbing Akanksha when they went out for the first time together. Shrey came and sat beside Natasha, and he held her shoulders gently and turned her to face him. She had puffed and watery eyes, and a choked voice.

‘Hey, first of all, stop crying. There’s nothing to be ashamed or sorry about. You love him, right? And you made love to him, what’s wrong? What’s the big deal? I don’t understand why are you even crying?’ Shrey held a hand on her head gently.

‘I’m not against you at all, I’m only concerned about your life. That guy you are dating, he’s not a good guy, and you’re a good girl, aren’t you? You’re the one we love and not him, that’s the reason your sister is also so worried about you that she left everything and rushed here.’

‘Shrey, please try to understand, I love him…’

‘I understand, baby! But this is not your time. That guy is not right for you. When love happens, you’ll know. I had many other women in my life before Akanksha, but I never experienced true form of love until I met her and married her. She’s the one who completes me. If you feel something alike for someone, that means you’re in love, but if you’re meeting and dating just for some intimate pleasure, that’s only lust…’

‘Natasha, listen…listen! I’m not blaming you at all. What you did was right, absolutely right. Getting close to someone you love isn’t a bad thing, but the person should be the one who should deserve such form of love. Not everyone has the right to explore your body like the way no one else can. Not everyone deserves to feel special with you, there’s always a certain person, who deserves that special place…’

‘Do you think of me as a slut who slept with a guy for her lustful needs?’

‘Hey! Who said that? That’s so not me! I respect ladies a lot, and if guys do that, they’re termed as studs, but if girls do the same, they’re called sluts? That’s unfair and plain stupid! I respect you, and my respect for you has doubled seeing the kind of love you feel for him, the way you’re ready to sacrifice everything for him, and the way you’re protecting him. But listening to someone who cares for you, isn’t a bad thing either. Try to understand, dear. If you don’t believe anyone, you can come with me tomorrow, and I’ll show you the evidence of that guy being stuck into political and criminal havoc.’

‘Thanks Shrey! At least you don’t hate me…’

‘Your sister also, doesn’t!’ Shrey looked at her, and smiled.

‘She hates me, she was about to slap me today.’

‘That’s because she loves you like no one else does. She’s concerned for you. She tells me how she has raised you up like her daughter, instead of her sister. How she was always worried about your health and how she took care of you when you were sick. You’ve got two mothers, little girl!’

‘But I broke her trust, I don’t think she’ll forgive me ever!’

‘She will…she’s the most soft-hearted and gentle women I’ve met in my life, and she’s not the one who keeps grudges for long. Just give her some time, and handle her with patience and love. She’ll not only forgive you, but also help you and take you out of this mess.’

‘Really? You mean, she still loves me?’

‘Of course, kiddo! You’re my most special and youngest sister-in-law after all!’ Shrey winked and smiled.

Natasha hugged him, at first, even Shrey hugged her back and placed a hand over her head, but Natasha moved her hand from his neck to his back, and hugged him tight. She started moving her hand over Shrey’s back. Shrey started feeling uncomfortable, and as he pushed her back, he saw Akanksha standing at the door.