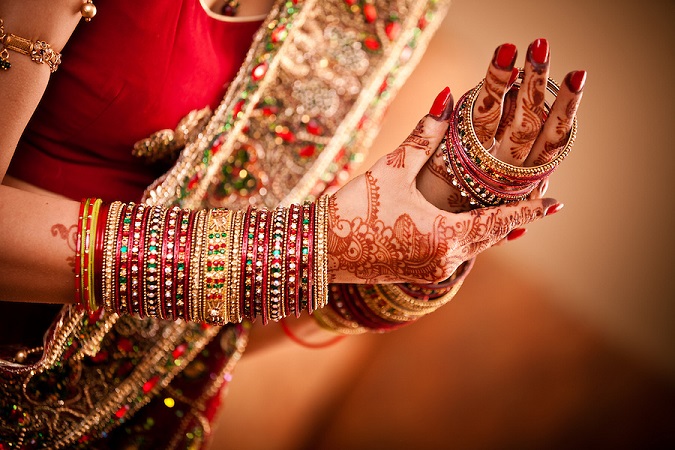 The marriage was finalized, all the ceremonies were going on. Akanksha had henna on her hands, arms and feet. She was all prepared to get married. But Shrey couldn’t think anything beyond the first night with Akanksha.

‘I’m waiting, sweetheart…’ Shrey called Akanksha just few minutes before climbing the mare, which was standing in front of his house now.

Everyone was calling the groom as it was time for the Baaraat to leave, but Shrey was talking to Akanksha, by hiding in the bathroom.

‘Where is this stupid boy? Have you seen Shrey?’ Anjali was roaming in the house, asking every second person about Shrey’s whereabouts, but no one had seen him.

‘Mr Chauhan, can you please see where our son has eloped? Nobody has any clue, and the mare is right outside! All guests are waiting…’

Mr. Chauhan called Shrey and his phone was busy. Moreover, in all the noise and hustle-bustle, Shrey couldn’t hear his dad’s call coming in between.

‘I’m in the parlor, Shrey. I’m getting dressed, please let me go, the Baaraat could arrive any moment…’

‘Hahaha, what? How can the baaraat arrive when the groom himself is in the bathroom!’

‘Oh my God! Shrey, look at the time, its 9pm. What are you doing?’ Akanksha freaked out.

‘I’m not going to move, unless I get a kiss from you…’

‘Muwah!’ Akanksha kissed him loudly over the phone.

‘Gotta go, sweetheart. I got a wedding to attend!’

They both disconnected, and Shrey stepped out of the bathroom. Mr. Chauhan was standing right outside.

‘Hello, son.’ he folded his arms, waiting for him to explain.

He climbed up the mare and with all the pomp and show, they reached the wedding hall. After a few ceremonies, Akanksha arrived. She was looking no less than a princess. Shrey fell more in love with her after that moment. He held her hand and helped her climb up the stage.

‘Let’s go straight to the bedroom, what say?’ he whispered in her ear.

‘Shut up…everyone’s got their eyes on us!’

They both were whispering and gnashing their teeth to talk. With all the cameras and even the media focused on them, even the lip movements were dangerous tonight.

After a few hours, they legally got married, and after some more ceremonies, Akanksha finally stepped inside the Chauhan mansion, not as a guest, but as a new member of the family, as the daughter of the house.

‘God bless you my children…’ Anjali welcomed them both with a plate of Aarti. They had a little prayer and some rituals, and in the morning, around 8 am, they were all free!

‘Can I sleep now? Please?’ Shrey was yawning badly.

Anjali told the maid to guide Akanksha and Shrey both to their room with Akanksha’s belongings.

‘I never thought getting married would be so tiring…how do the grooms find the energy to perform in bed after marriage? I’m dead tired…’ Shrey fell on his bed diagonally, leaving no space for Akanksha to even sit anywhere.

‘Shrey…’ she spoke up. Crying for hours made her voice choke.

‘I’m not saying that, Shrey! Do you ever think about anything beyond ‘that’? Can you listen to me, baby?’ Akanksha gently placed a hand over his shoulder.

‘I need to change…and this heavy jewellery is almost stuck in my skin, I feel!’

Shrey got up, rubbed his eyes. He was also wearing his wedding clothes. He needed to change as well. Ignoring Akanksha, he rushed to the bathroom, and came out in five minutes after slipping into something comfortable. As he stepped out, he saw three huge briefcases and Akanksha sitting near his dressing table, struggling with a huge neck-piece. He gently opened the hook and removed the diamond necklace, one by one, he helped her remove every piece of jewellery. Soon, they made a pile of jewellery on the table.

‘Who wears so much? Didn’t you go insane? It was a wedding, for heaven’s sake, not a fancy dress competition!’

‘And what’s in all these bags?’

‘My clothes and other things.’

‘What are they doing in my room?’

‘Excuse me? You’re a married man now, and I’m your legal wife, and it’s my right to share a room with you, so it’s obvious that my belongings will also stay with me!’

‘Exactly! Now I know, why I’m so dumb…that’s because I’m short of sleep. Hey, you said you needed help…you need to remove these heavy clothes too?’

‘NO! I can do that myself, Mr Husband. Now you go to sleep…’

‘Hey, this is unfair. I helped you remove the jewellery, I should get a chance with clothes too…this is not done!’

‘Whatever…’ Akanksha pushed him back, locked herself in Shrey’s bathroom and changed her hugely heavy piece of clothing.

As she stepped out in a comfortable pair of pyjamas and an oversized T-shirt, she saw Shrey asleep on the bed, but this time, he slept on one side, leaving a lot of space for Akanksha. She smiled, lied next to him, and hugged him from behind.

‘I know I’ve never said it before…but now I feel it’s the right time to say…I love you, Shrey…’ she kissed him in his head and slept hugging him.

Shrey, who was pretending to be asleep, smiled and whispered to himself, ‘Love you too, sweetheart’.