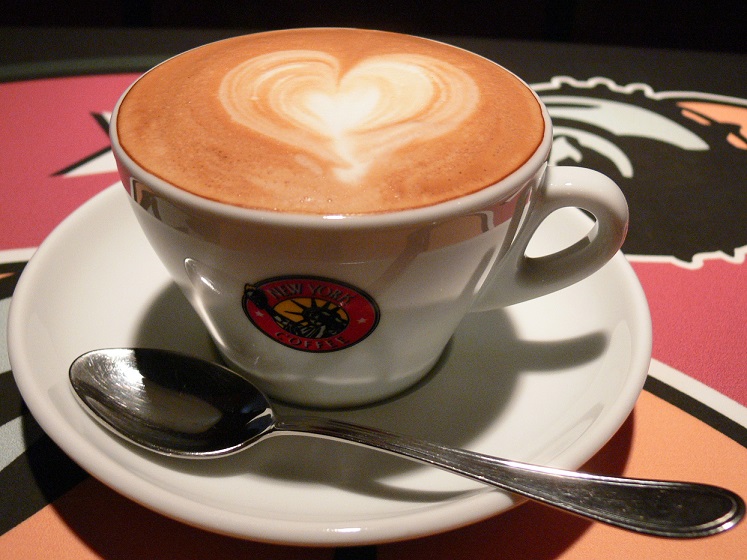 ‘Me too!’ Akanksha held her tummy, ‘I didn’t eat anything except for the breakfast because mother told me to look slim for the evening!’ Akanksha made a baby face.

‘At this time of night?’

‘Come’on, get off.’ Shrey got off from the car and walked towards CCD, leaving Akanksha behind.

‘Sick, dumb man! Doesn’t know how to treat a lady at all…I wonder how will we survive together if we are married in future! This man? As my husband?’ Akanksha was talking to herself as she was getting off the car.

‘You want me to wait for an eternity? Can’t you be a little quick?’ Shrey shouted from the other corner of the road.

Akanksha started to cross the road and Shrey punched the automatic lock of his car to lock it from a distance. Akanksha was crossing slowly, and the traffic was passing by her hastily. She was scared, but somehow she reached the opposite side of the road. She stepped up on the pavement, and suddenly her foot slipped behind. Shrey saw her and held her from her waist tightly.

‘Are you out of your mind?’

‘Why are you girls so dumb?’ Shrey immediately left her and held her arm tightly, and they climbed up the staircase of CCD together.

The waitress offered them a secluded corner seating for two, but Shrey refused straight on her face.

‘No, I think this table is better!’ Shrey pointed towards a table in the middle of the café. It was all crowded around them.

*So Unromantic! I am not going to marry this guy…never!* Akanksha spoke to herself.

‘Alright…’ Shrey sat on that ‘unromantic’ seat. Akanksha had to follow.

‘Hi, I want a hot choco latte, a spinach sandwich and some apple pie, but in the end.’ Shrey ordered his meal, while Akanksha kept staring at him with an open mouth.

The guy was totally ill-mannered, he didn’t even ask Akanksha what she wanted to have.

‘Do you want something? If you’ll take so much time deciding, then sorry, my hungry stomach can’t wait that long…’

‘Ummm, just a cold coffee, and a vegetarian wrap.’

‘I hate wraps…’ Shrey murmured, but the waitress had already walked away with the order.

‘So, what do you do?’ he asked her while rubbing his hands.

‘Please…be a little quick, can you?’

‘Wait, hold on. You’re how old exactly?’ Shrey was was amazed and shocked!

‘And you agreed for marriage? What were you thinking?’

‘I’m doing my B.A. Honors. I’m in final year, will complete it within a few months, and then I’m free…’

‘What do you mean, you’re free? I’ve left college five years back, but that doesn’t make me so free so as to wanna marry someone!’

‘You’re a guy, staying at home, doing nothing, is easier for you. For a girl, when her education is complete, she has to get married. One or the other day, she has to…’

‘I agree, one or the other day, but why so early? Why just in college?’

‘I never refuse my parents. Their choice is my choice…’

‘Hmmm….’ Shrey thought for a moment. He didn’t remember even a single moment of having agreed to his parents. Such a brat he was! Meanwhile the food arrived, and they started eating from their separate plates.

‘So, tell me. You’ve had any boyfriends before?’

‘Hey, water, here…are you okay?’ Shrey handed her a glass of water. She had managed to attract almost everybody in the café.

‘Yeah, I’m fine. And sorry to disappoint you, but I’ve never had any boyfriend. EVER!’

‘Whatever, you tell me, you had any…wait, tell me the number straight!’

‘Hahaha, so you know…well, seventeen till now…’ Akanksha’s food almost came out of her mouth. The guy was shocking her more than she could imagine.

‘What happened? See, I don’t want to lie to you. You like it, or not, it’s the truth. I’ve had seventeen girlfriends, my first one was when I was 14 years old, and till the age of 16 I had around 10 girlfriends, fluctuating relationships. Bad heartbreaks. Sad songs. Too much depression. Then at the age of 16, it was like, one girl for one year. Some of them are still in touch, many of them, I guess, all of them are married now, and some even have kids. I still meet them, and with some I have very friendly relations even now. My mother knows everything, but dad, not even a thing! And one last and the most important thing, I’m not a virgin…’