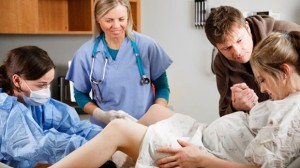 Shrey was strolling in tension in the hospital corridor. His mouth still had toothpaste foam on, and he was wearing a T-shirt with pyjamas.

‘Shrey, beta at least wash your face…’ his mother told him, ‘what will your kids think when they’ll see you?’

‘Mom? They won’t even know that they’re born, and they’re too small to recognize me, please don’t lure me into your plans by such stupid explanations!’ Shrey was tensed, while his mother was trying to make his mood light.

‘Why do you worry so much? You know, when you were born, your father was tensed, exactly like you, and after the delivery, I saw him with the same facial expression…’ his mother chuckled.

‘Mom, please! I’m not here to listen to my birth stories, I’m worried about Akanksha, and there are two babies…’

‘Shrey! You’re not the first father to have a set of twins, world has seen thousands of twins and triplets before, and yours will also be perfectly healthy. You took great care of Akanksha in these nine months, that hard work is going to pay today…’ his mother kissed his forehead.

‘Excuse me, Mr Shrey Chauhan?’ a nurse came out of the delivery room.

‘Yes…what happened? Is my wife okay?’

‘Akanksha ma’am is calling you inside…please come with me.’

Shrey became more tensed. He followed the nurse and reached a brightly lit room, where Akanksha was sitting, with her legs apart.

‘Shrey…’ she screamed seeing her husband.

‘WHAT?’ Shrey also screamed with almost similar intensity. He rushed and held her hand, ‘Are you okay sweetheart? Do you want some water?’

‘Shut up, Shrey!’ Akanksha was screaming and crying in pain.

‘Hey, what the fuck are you doing?’ Shrey shouted.

‘Sir, they’re doing their job, please calm down. Usually we don’t allow husbands into the delivery room, but ma’am said she needed your support.’ A nurse said, and gave some water to Shrey, who was shivering and sweating.

‘Nurse, has the crowning started?’ a doctor said, the team was working effortlessly for arrival of Chauhan babies.

‘Not yet, she needs to push harder…’ the doctors started encouraging Akanksha to push with all the energy she had.

‘Can I check if something is happening?’ Shrey courageously stepped forward.

‘Of course, you can, just relax Akanksha, take deep breaths, relax, relax…’ her gynaecologist was continually encouraging her and relaxing her to keep her vitals stabilized.

Shrey stepped forward, stood in front of half-naked Akanksha, he could see crowning starting, the blood flow made him nervous and he fell down on the ground, unconscious!

‘SHREY!!!’ Akanksha screamed, her blood pressure was rising. Two nurses picked up Shrey and lied him down on the bed next to Akanksha’s. She was worried about Shrey so much but the doctor made her confident, that Shrey was okay. Another doctor was called to take care of Shrey, they shifted him to another room, and within a few minutes he gained consciousness.

Meanwhile, Akanksha’s first baby was out.

‘Akanksha…’ Shrey mumbled, and a nurse gave him a glass of water.

‘A Boy? What about my other baby?’ Shrey held his head which was aching uncontrollably now.

‘Get a side, lady…’ Shrey got up from his bed, and reached the delivery room where Akanksha was giving birth to their second child.

She was nearly dead, screaming, crying, sweating, she was panting so badly, but the team of doctors was hopeful that she will make it. They were injecting fluids and medicines into her body, side by side. Soon the second baby was out too. The nurse spanked the baby, cleaned it, and handed it over to Shrey.

‘Congratulations, Sir. Your second baby is also a boy…’

‘Again a boy? No girl?’ Shrey was overjoyed with the birth of his healthy babies, but a little disappointed, because he wanted a daughter.

Shrey walked towards Akanksha, who was badly exhausted. A nurse pierced a needle in her wrist, and they started flushing glucose and various other fluids in her body.

‘We’ve become parents…of two boys! You wanted a son, and see, God fulfilled your wish twice. We made two gorgeous babies, sweetheart…’ Shrey started crying out of emotions. He was overwhelmed today; nothing in his life gave him so much happiness as this day. Akanksha was still not healthy enough to speak; she mumbled something, smiled and slept.

‘She’s too worn out, let her rest, Sir. Till then you can deliver the news to your family members.’ The doctor said.

Shrey handed over the boys to the nurse, who placed them both in different cots. He walked out and hugged his mother tightly.

‘What happened, Shrey? Is everything okay?’

‘Oh! Shrey, I love you…’ her mother kissed his forehead, ‘Tell me, Shrey, is it a grand-daughter? Will I get a chance to raise a baby doll this time?’

‘No, mom! Two sons…’ Shrey knew how much his mother wanted a daughter. Shrey was also the only son of his parents, and his mother’s dream of raising a daughter never came true. And now again when Akanksha was blessed with two baby boys, a little disappointment was visible on his mother’s face.

On the other side, Akanksha’s family was happiest on the entire planet as they got the news about birth of two healthy boys.

Everyone had mixed emotions that day, but inside, everyone was happy for both, the mother and the babies were perfectly healthy!