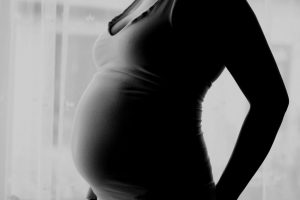 Shrey was sitting in the balcony, sipping his morning tea. Akanksha came and hugged him from behind.

‘Good morning, Shrey!’ she placed a gentle, warm kiss on his forehead.

‘Couldn’t you wake me up? See, it’s almost 9 and I’m not supposed to sleep so long.’

‘Sweetheart, I could have waked you up, but I can never wake my babies up if they’re sleeping.’ Shrey placed a hand on Akanksha’s tummy, and smiled.

Shrey pulled a chair for Akanksha, and helped her sit down. Her huge tummy was making it difficult to even do the normal daily chores. She could only eat, sleep, take medicines, go for a walk, eat and sleep again. This was her daily routine since over a month now.

Shrey called the servant to take the empty tray and tea set, and told him to bring breakfast for Akanksha. Shrey was keeping strict note of Akanksha’s daily diet and the food she took, since she revealed her pregnancy. Her medicines, soup, salad, three time meal, snacks and everything else had a fixed time, and Shrey would never allow Akanksha to even walk to washroom alone. He always accompanied her, wherever she went. With twin babies inside her womb, Akanksha’s stomach had become almost twice as large as that of a normal pregnant woman. The doctors had advised her to take as much rest as possible. It had become almost impossible for her to sleep with such a big tummy. Whole night would pass by in just taking turns from one to the other side, and Shrey’s snores would accompany her every night.

‘How are you feeling sweetheart?’ Shrey asked her next morning.

‘Ya, say?’ Shrey was lost in the morning paper.

‘Don’t you think we both have become too boring over the past few months? I mean, we just ask each other about our health, eat together, sleep together, but that old spark, it has fainted, lost somewhere. Don’t you think so?’

Shrey folded the paper, and kept it aside.

‘Sweetheart, look at me, you’re pregnant, almost 8 and a half months, our babies are merely two weeks away, at this moment, I can’t even think about intimacy, or making out. Look at you, I can’t even hug you properly, and this difference has arrived only because of lack of intimacy. We haven’t made out in over four months now, it’s the first time, we experienced such a long gap, and the gap is going to increase, because even after delivery, you’re advised strict rest for at least one more month. It’s natural to feel that way, sweetheart, but don’t be upset. I’m here, with you…’ Shrey held her hand and placed an arm across her shoulder, ‘You’re my sweetheart, right? We’re soon going to be Mom and Dad, and there’s a huge surprise, lying in here…’ Shrey touched her stomach.

‘Shrey…can I ask something? Promise me you won’t decline…’

‘Anything in the world, sweetheart…’

‘Sweetheart, we can’t! We just can’t, in this condition, it’s so not safe.’

‘I’m not talking about myself, go have sex with someone else.’

‘What the fuck are you saying? Are you out of your mind?’

‘Shrey…Shrey, listen! You were a non-virgin before our wedding, if I didn’t have a problem then, so, I don’t have a problem now. I want you to do this, because you’re stopping yourself because of me. I haven’t been able to keep you happy. Look at yourself, how boring you’ve become. You just don’t seem like the old Shrey, the Shrey I fell in love with…’

‘Sweetheart, stop! Whatever you’re saying is just bullshit, and in no way I’m going to do that.’

‘Shrey, if I don’t have a problem, then why not? Nobody will get to know about it…’

‘And where will I go? To a brothel? Where there is no humanity? Where money can buy piece of someone’s soul? Are you actually advising this, Akanksha?’

‘No, not a brothel, I…I don’t know where, but just do it, and become normal, just go!’ Akanksha’s mood swings had overtaken her common-sense, and she was talking all rubbish.

‘Akanksha, whatever you’re saying is totally insane! Wife is eight months pregnant with twins and husband is banging someone else, what kind of behaviour is this?’

‘Who said I’m not happy? This time is very crucial for both of us, and what we need at this time, is each other’s support, and not depression. What you’re forcing me into, can prove fatal to our marriage, do you have any idea? And in no way I’ll do that, never! I love my babies far too much, to sacrifice just a few months of sex. I’m totally okay in staying away from you, even for six more months if need be, but don’t you dare force me to spend a night with someone whom I don’t love, okay? I love YOU, and not anyone else.’ Shrey got up and went to the washroom.

Akanksha knew she had unintentionally hurt Shrey. Although, she was trying to make him happy, but ended up upsetting him instead

‘I’m sorry Shrey…’ Akanksha held Shrey from his shoulders. Shrey was brushing his teeth. He looked at her with a weird expression.

‘I told you, I’m sorry…Shrey…aaaa…ouch….Shrey…’ Akanksha immediately knelt on the ground. The pain in her lower abdomen was becoming unbearable. Shrey spat the toothpaste-foam and picked Akanksha in both his arms. He could feel her lower getting wet. Her water had broken…