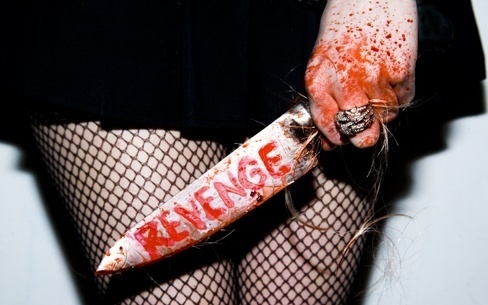 The topic I’m bringing up in this post, is a very common one. Most of the messages or relationship problems I get, revolve around this issue. The issue is ‘Realization and Revenge’.

If not a relationship, do you want to seriously take a revenge? I mean, ask yourself, do you have time to think about a plan to make him realize his mistake? What if you spend that time in improving yourself? In doing something for yourself, in your betterment? Won’t it be better if you work on yourself after the relationship, so that you don’t repeat your mistakes again?

First of all, learn to accept the reality. Your relationship is OVER. It has nothing to do with your future anymore, and it’s totally up to you now, how much time will you waste in coming out of it? After accepting the reality, accept the fact that some part of you is also responsible in breakup. Just like a hook-up, a breakup also requires two people. If two people are needed to make a relationship, those two people can also break the relationship. If he left you for someone else, ask yourself why? It doesn’t means you’re less than someone, it simply means either you gave him too much freedom, or you fought a lot and suffocated him that he left you. These two are the only major reasons why guys breakup, unless their marriage is fixed by their parents, but that’s a totally separate issue.

Once you’ve accepted some truths about the relationship and yourself, now comes the second stage, which is ‘recovery’. Recover from your broken relationship by improving yourself, by doing something new, changing your boring routine. The time you spent talking or chatting with him, is gone now, try exercising in that time and work on your body. Try cooking or dancing or yoga, explore yourself and explore your hobby, something that calms you, something that brings you near yourself, so you can love yourself first.

If you can’t love yourself, how do you expect someone else to love you? There’s no reason to hate yourself if you suffered a breakup, you are NOT less than anyone, keep that in mind. Some things just happen to teach you certain lessons in life, try learning those lessons from your broken relationship. Analyze your past, count your mistakes and vow to never repeat them in future.

Relationships provide you a mirror to yourself, in which you can see not only your qualities, but your flaws too. Try using that mirror for your benefits. Relationship, whether broken or not, teaches you a lot of things on each step, it’s time to revise your past and learn.

Revenge is a tiny little thing. If you want to make him realize what he lost, do something so incredible that the news shall hit his ears from his friends and family, rather than you telling him anything. Be someone, do something for yourself, for your family, portray yourself as a strong and firm-hearted individual, who can’t break. He’ll automatically regret his decision of breakup. Guys love self confident girls, and they hate cry-babies. You better know what to do now…

I don’t find any point wasting any time in making plans for a revenge. What will happen after that revenge? Nothing. He’ll hate you more for intervening in his life. Be mature and be sensible. Breakups happen for a reason, and most importantly, you can’t force someone to live with you, can you? If you can’t live with someone forcefully, how do you expect someone to live with you when he doesn’t wants to? Set him free, it’s for your betterment only. What if he bothers you in future, what if he makes your life hell, or he puts restrictions on you, you fight every second day, relationships can’t work like that, can they?

Better than taking any revenge, work for yourself, make your life worth living and you won’t hate anything.

You Get one life to live, live it the way you want to, live it with a smile and happiness, live it to the fullest…

God will bless you with someone even better. If you’ll be self confident and well settled, nobody will reject you, you’ll definitely get a good guy

So, stop worrying and start working. Your Prince charming is waiting for you!!