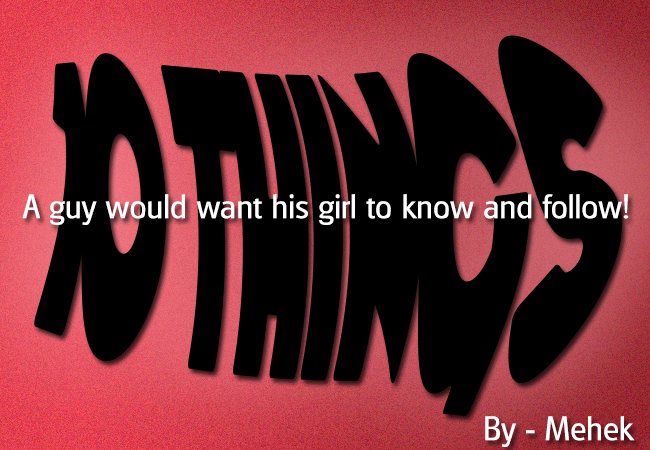 Every guy wishes for a decent, confident, educated girl to be his life partner. But then there are some secret wishes that every guy ‘wishes’ his girl to know and follow! Here are the ten things every guy must have thought for his life partner to have –

1. CONFIDENCE – Gone are the days when wives were supposed to be the ‘obeying’ partners. Now guys want their partners to be confident and bold, and not submissive in any way. They want their wife to have her own stand and opinion. They want her to have a stronghold on what she thinks and her personal opinion over what she believes in. Even if you’re meeting your partner’s friends, he expects you to talk smartly and be bold and not shy.

2. EDUCATION and JOB – After confidence comes the second most important issue, which is education. Although the families of groom also want an educated girl for their son, but guys these days don’t simply settle for their parents’ choice of a 12th pass girl! They want their partner to be well educated, may it be any course, she should be intelligent enough to at least convert her education into a career. In today’s time of competition, inflation and falling economy, it has become mandatory for both partners to earn, and so it’s important for a girl to have a job these days. Cleaning dishes and washing clothes shouldn’t be the priority, and ‘house-wife’ is soon going to be an extinct term.

3. OUTGOING and INDEPENDENT – ‘How am I looking?’ ‘Is this dress making me look fat?’ ‘How is this color?’ ‘Do you think I should go for this foundation?’ ‘Should I buy these heels?’

All these questions are no doubt very important in a girl’s life, and we need multiple opinions when it comes to shopping, but then a guy wants her woman to be independent enough to be making her own choices. She should ‘know’ what looks best on her and what not. What makes her look fat, and what makes her look ugly. She should at least know the basics about her own self, and she shouldn’t bug her guy for such little things.

4. FINANCIALLY STRONG – No, it doesn’t mean you should have a million or gazillion in your bank account, but it simply means you should ‘shed’ the old norms about a guy to be held responsible for every bill. Guys want their partners to be doing a job, making career her priority, and earning well, and sometimes, when you’re on a date, spending a few hundred/thousand bucks from your pocket won’t kill you! But it surely will make your guy respect you more for being financially strong. Money is one thing that affects a relationship the most! You shouldn’t burden your guy with all the bills if you’re earning as well.

5. MAKING THE FIRST MOVE – Now this is one thing that hardly any guy would admit, but secretly they all wish for it! While in a relationship, most of the times a guy makes the first move. May it be approaching the girl, proposing to her, asking her out for a date, or taking her to bed. All these things are ‘normally’ initiated by guys, but it’s not ‘wrong’ if a girl makes the first move. If you’re in a relationship (even marriage), asking your partner out for a date, or for sex isn’t a crime, and believe me, it will ‘not’ make you a whore! Guys want their girls to be confident enough to ask them out first. Not all girls are able to do so, but those who do so, surely bag a lot of attention and love from their partner.

6. TAKING IMPORTANT DECISIONS – Most of the times, a house-wife would be unaware of her husband’s job/business and was mostly into her household chores, while husband was the one who was burdened by tensions of his job/business. Those days are behind us now. Now girls themselves work and have knowledge about their partner’s job. Guys in such cases, expect their girls to take interest in what they do, and help them (sometimes) with their work. This will not only improve bonding between the couple, but will also make the guy respect the girl more. Girls who are confident and independent are usually not victimized by domestic violence as well.

7. GIVING SURPRISES – Guys will never admit how much they love surprises, but secretly they do! It may sound a very feminine thing, and such girly stuff brings their masculinity down, but inside, they all wish for a girl who would surprise them at certain occasions. It’s not a guy’s responsibility to always give you gifts and surprise you with presents and parties on your birthday or anniversary, sometimes, you can take the command and become the master! You can always surprise your guy with presents on his birthday, or even yours! It’s not a big deal, and neither a taboo. You can always buy him his favorite perfume/cologne, or his favorite brand’s clothing, a nice watch or a belt or wallet. There is a variety of gifts available for guys. If nothing else, you can always surprise him with a hot make-out session on his birthday, believe me, he’ll love you for such an unexpected surprise!

8. GOING OUT ON SHOPPING – Guys take you for shopping, yes they do, because it’s their duty! Have you ever taken out your guy on a shopping spree? Make sure that once in a while, you take your guy out on shopping, and buy him stuff he likes. He may not let you pay, but he’ll love you for at least taking out time for buying his stuff and giving him importance in your self-obsessed schedule! He’s always the one who’s with you even if you have to buy a bottle of nail-polish, make sure you accompany him once in a while for buying what he needs!

9. PROVIDING FREEDOM – It’s important that you have a personal space in a relationship. Clinging together 24/7 isn’t a sign of a healthy relationship, and if you have no social circle apart from your partner, you are in a deep trouble my friend! Guys love spending time with you, but they also need some time out with their guy-friends. They love watching movies with you, but they also need to discuss cricket, football and politics with their friends, drink beer and make noise! Make sure you ‘allow’ your guy such a trip at least once in a while so that he’s not termed a ‘loser’ by his friends. Your guy will not run away if you provide him such freedom, but he will surely love you and respect you more for understanding his needs.

10. TRUST and PEACE – No, I’m not saying that girls are violent, but some girls tend to fight a lot, over smallest of the small issues, which annoys guys as all they seek from a relationship is – mental peace! If you keep fighting with your guy because he didn’t reply to your ‘Good Morning Baby’ message, or he didn’t inform you before meeting his friends, your guy will surely run away someday! Nobody can live with such a partner who turns out to be a CIA agent and a secret detective. You need to trust your partner with his decisions. If he’s meeting one of his old female friends alone in a coffee shop, it doesn’t mean he’s having affair with her. If he’s chatting with a girl from his office in the midnight, it doesn’t mean he’s cheating on you! You need to trust your guy and make things comfortable and peaceful with him. Keep your relationship so transparent and open that your partner is the one to inform you about every person who enters or exits his life, instead of you digging evidences against him!

If you’re able to provide these 10 things to your guy in a relationship, you will never feel deficient of love or attention, and your partner will never cheat on you!